The prodigy artist Gustave Dore was born in Strasbourg, France in the 1830’s. His youngest childhood drawings allowed him to begin carving by the time he had reached his tenth birthday. As a teenager, he gained professional art experience working as an engraver and comic drawer for local patrons and newspaper companies. He illustrated for many renowned writers such as Lord Byron, Cervantes, and Poe. He lived his fifty-one year life with his mother and father, for he never married.

Since he engraved a majority of his works, they are most commonly presented in grey scale. It is unusual to see a work of color from Dore. He commonly did work on biblical scenes such as the one below entitled “Paradise Lost,” which represents the expulsion of Adam from paradise after his evil sin. The second is his rendering of the raven from Edgar Allen Poe. Noting the extensive detail in his works, they are appealing to readers as they enhance our understanding of the content. 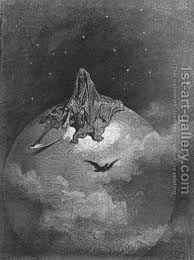