Kay Nielsen was a Danish illustrator that was born on March 12th, 1886 in Copenhagen to a very artistic family. Both of Nielsen’s parents were famous actors of their time and this allowed for Nielsen to become interested in the area of art. He studied art in Paris and later received his first English commission to illustrate a collection of fairytales form Hodder and Stoughton.  Later that year he received another commission to create illustrations for Charles Perrault’s fairytales including Sleeping Beauty, Puss in Boots, Cinderella and Bluebeard. Kay Nielsen became incredibly popular in the early twentieth century as a key artist in the Golden Age of Illustrations. He is also most known for his collaborations with Disney, for whom he contributed many sketches and illustrations.

The two images below are some of Kay Nielsen’s famous pieces. The one on the left is an illustration for Cinderella and the one of the right was created for a Thousand and One Nights. I think that Kay Nielsen has a very specific artistic style that is very distinct from other artists. The Cinderella illustration has a very strange/indie feel to it and not exactly what you would initially picture the classic fairytale to be depicted as. However, I do like the designs that he uses on the dresses and the use of white throughout the piece. The other image, for a Thousand and One Nights, I feel represents the fairytale perfectly with the colors used and the Arabian designs around the main focus. I like how he depicted the characters of the story to clearly show the disgusting power that the man holds over the girl but I wish he could have displayed the girls cleverness in his illustrations. These two images were seen constantly throughout the early twentieth century and are still seen in a variety of ways today. 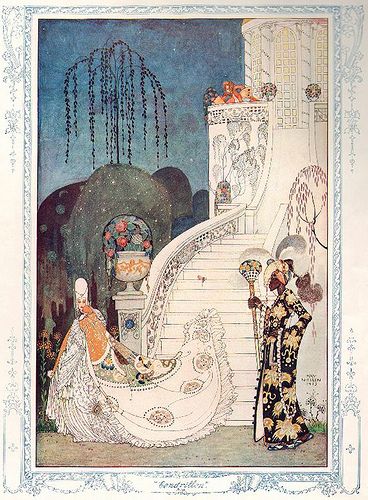